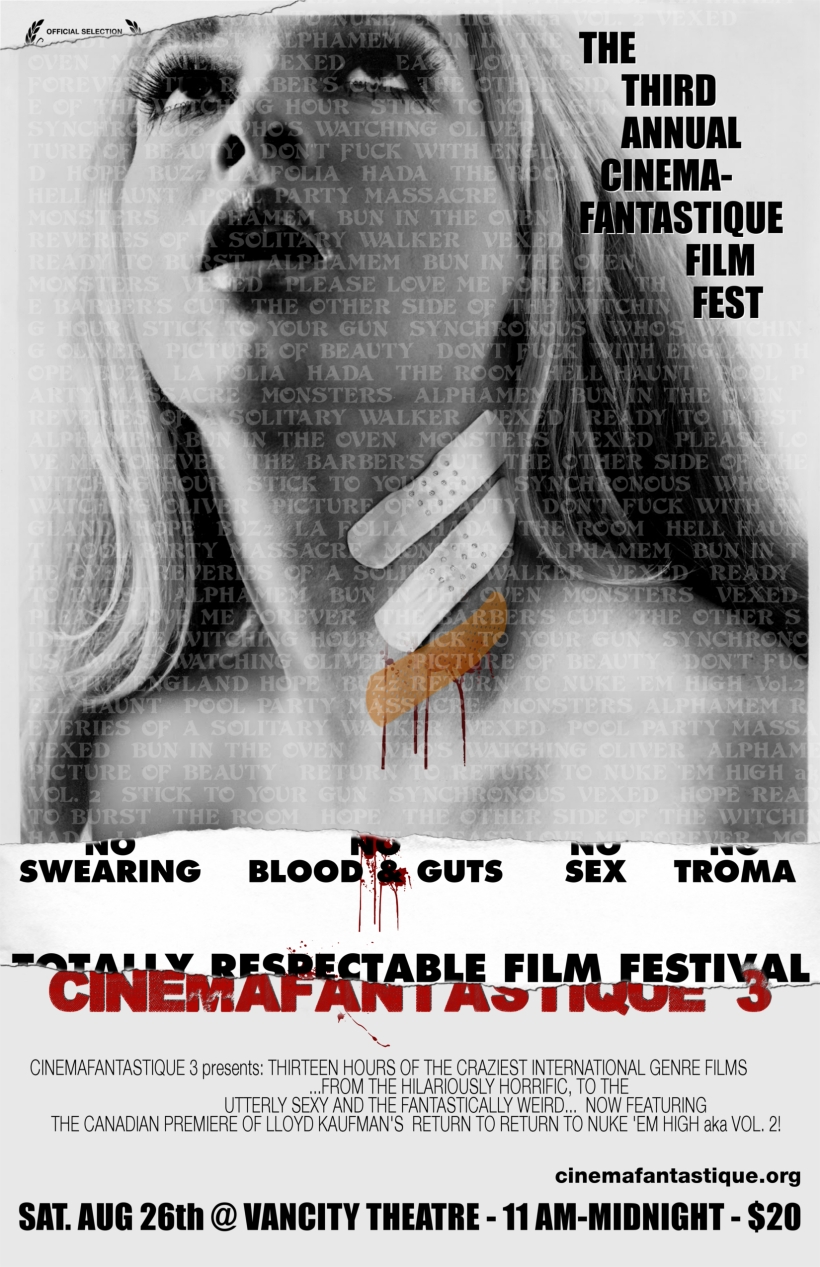 Thank you to the audience for attending! Thank you to the people who came up to us to tell us how much you enjoyed the films. Thank you to the people who came all DAY. Thank you Mom. Thank you to my long time friend Danielle, who isn’t a fan of the horror genre, who came just to support and didn’t leave her seat because she liked the films so much. Thank you to the Troma fans who came out to say HI to Lloyd, and a special thank you to Joanna and Brian for making the fucking incredible Toxie Cake! Thank you to Will, Rob, Krista for working your asses off, to make the day easier for us. Thank you to Shane for taking pictures and video (can’t wait to see them!) Thank you to Daphne and Francis from The Vancity who made sure everything was running smoothly out front of house and the projectionists Jurgun, Tim, and Ron for making sure the films looked awesome up on the big screen! Thank you to Tom, J and Kathy also from Vancity for the opportunity to have the festival at this great theatre. Thank you to the Darryl from Netherworld and Monique and Peter from Cranium of Curiosities for selling your wares and support at the fest. Thank you to Brenin from Shivers Entertainment, who came all the way from Kelowna who wasn’t selling his wares, but jumped in to help us and Lloyd at the tables. Thank you to Darryl from Netherworld, David from Generativity Productions, Gigi, Raynor, Luke from Luchagore, Rob and Tom from True Confections (Mmmm cheescake), Hassan and Mo from Victoria’s health (Best damn smoothies in Van and North Van), Brenin Barrow, Drew Marvick, and Warner Bros. Canada for contributing to the prize giveaways. Thank you to our Community Partners Vancouver Short Film Festival and submissions coordinator, programmer Zlatina for coming out to support us. Thank you Dulcie and Jeremy from PDXtreme Fest for coming up from Portland. Thank you to our festival judges Nadine, Jennifer, Paul, and Rob, we know the filmmakers didn’t make it easy on you because they were all so good, so thank you for your time. Thank you to the filmmakers Jono Freedrix, Magan Wiles (Bun in the Oven), Drew Marvick (Pool Party Massacre) who came from far and away to support their great films. Thank you to the local filmmakers Ariel Hansen and Topher Graham (Bad Cookie Pictures), Jordan Barnes-Crouse (Bad Cookie Pictures), Richard Lukacs and Samantha Lukacs (Crone Cult Pictures), David Aboussafy (Generativity Productions), Gigi Saul Guerrero, Raynor Shima, Luke Bramley (Luchagore Productions), Nadine L’Esperance (Blue Girl Productions), Richard Mogg (Rick Moe Productions) for making awesome genre films in Vancouver! Thank you to all the filmmakers for making your art and putting it out for the world to see, you are all really talented so please don’t ever let the ‘Industry Crap’ way you down and stop you from putting awesome things out there! Thank you to Mr. Lloyd Kaufman for you are the King of Indie Genre Filmmaking, you are the kindest most generous person and I can’t say it any better than Richard said last night but you really do inspire so many people! So all aspiring filmmakers out there do as Uncle Lloyd says and go Make your Own Damn Movie, you might surprise yourself. 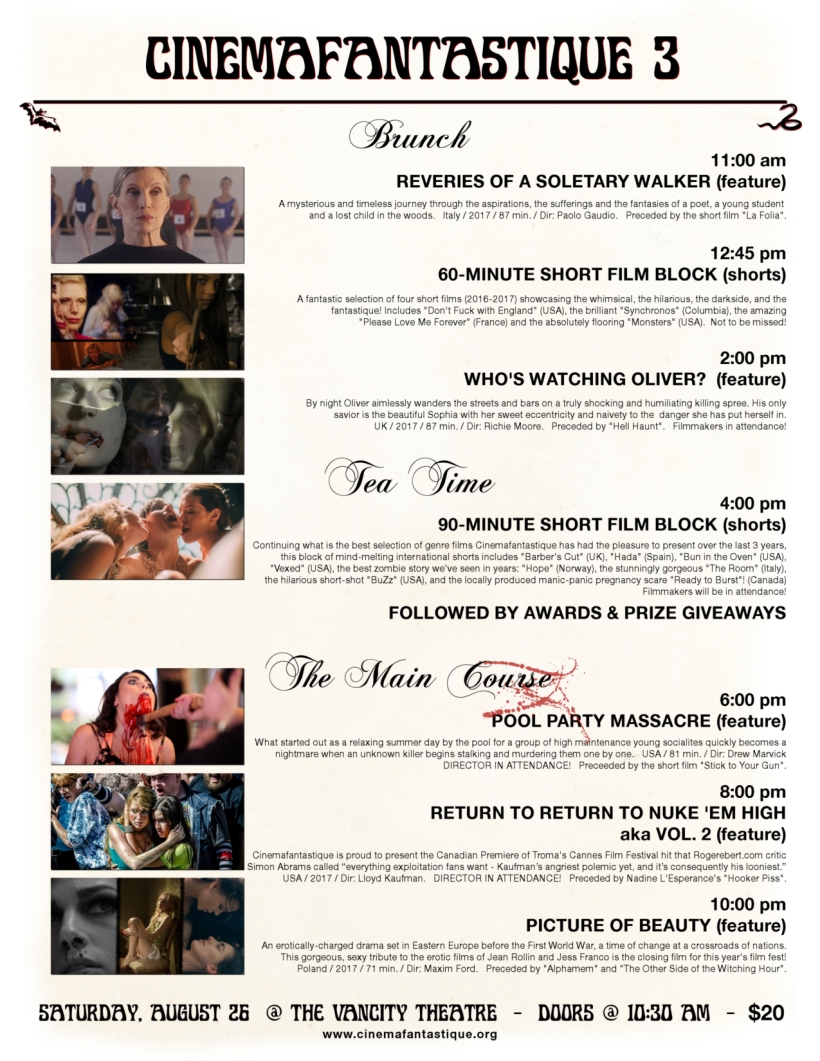 All right people, here is the Film ‘menu’ for the day! We realize it might be a bit early for some, so we will start you off with a light brunch, to ease your palate. But don’t think for a minute things will stay that way!

11am starts with a short film that isn’t horror but is captivating, it’s music is hypnotic and will keep your eyes on the screen. Our first feature takes you on an adventure that every filmmaker has struggled with. You might be laughing when the 1st short film block starts at 12:45, but I can guarantee you will not be by the end of it. – We have a little surprise for you – By 2pm we think everyone will be ready for some blood and gore!

OK, now it’s time for the main short film block, we are going to take you all over the place with this one! A great sampling of films from all over the world. We will be following this up with Awards and Prize Giveaways!

If you need a little sampling before you join us for the day check out the post CINEMAFANTASTIQUE 3 LINE UP . Many filmmakers will be in attendance, and the one and only Mr Lloyd Kaufman from Troma.

I bet by now your wondering how the hell you can get tickets!! Well for those individuals who want to get their tickets online at a discount, they are available now at Indiegogo and FilmFreeway , until Friday August 25th. On the day of the festival they will be available at the door for $20.

Looking forward to seeing everyone there!!! 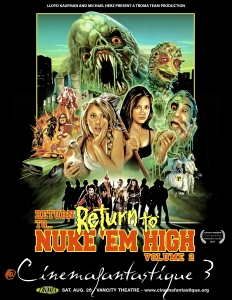 Well, we’re still winding down from this summer’s amazing Cinemafantastique fest and Vancouver’s first-ever Tromafest! But there’s more in store as we roll into the Autumn months…

Shivers Film Society is partnering with Scalarama in the UK (sponsored by the BFI) to bring a little John Waters love to the big screen. This September, the BFI and Scalarama are launching a huge John Waters 50th filmmaking anniversary retrospective. Yes, the mad genius has been making films for fifty years now! As part of this celebration, the Shivers Film Society will be presenting a Scalarama screening of John Water’s Cecil B. Demented double-billed with Troma’s Terror Firmer (directed by Lloyd Kaufman) in a night celebrating anarchy in filmmaking! Sunday, September 13th, 7:00 pm at the Norm Theatre (UBC). 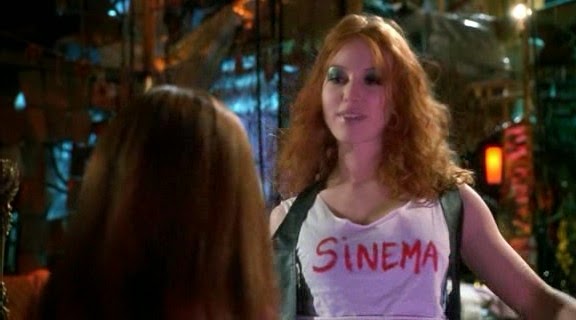 Following this, in October, Cinemafantastique presents it’s first annual 13-Hour Horror Film Fest! Saturday, October 24th, starting at 11:00 am, the day will be loaded with Vampires, Bugs, Psycho Killers, Killer Machines, Giallo, Razor Blades, Hacksaws, and General Mayhem. There will be at least 6 feature films running all day, all cult/horror classics, but the catch is… we’re not going to say which films you’ll get to see on the big screen! You can guess all you want… and if you’re right, you might even get some trivia prizes! It’s going to be a fun day of horror, a few laughs, some surprises and a little trivia with some giveaways! At the Norm Theatre (UBC), Oct. 24, 11:00 am – midnight. 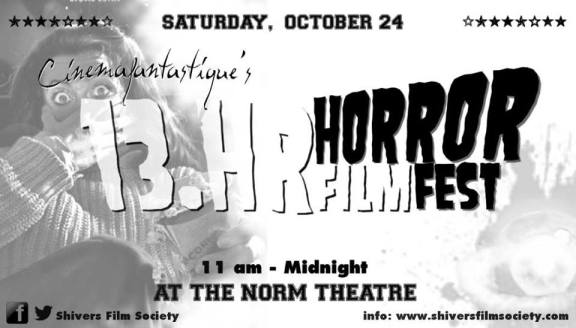 ALL ADMISSIONS BY DONATION!

Iconic classic films like Citizen Toxie: The Toxic Avenger Part IV, Tromeo & Juliet and the musical masterpiece Poultrygeist will be screened at The Norm Theater at UBC.
A very special The Toxic Avenger screening will take place at noon with live-audio commentary by Lloyd Kaufman. The legendary director will also be conducting a 90-minute version of his world renown Make Your Own Damn Movie Master Class on-site! Troma merchandise will be available through all day. 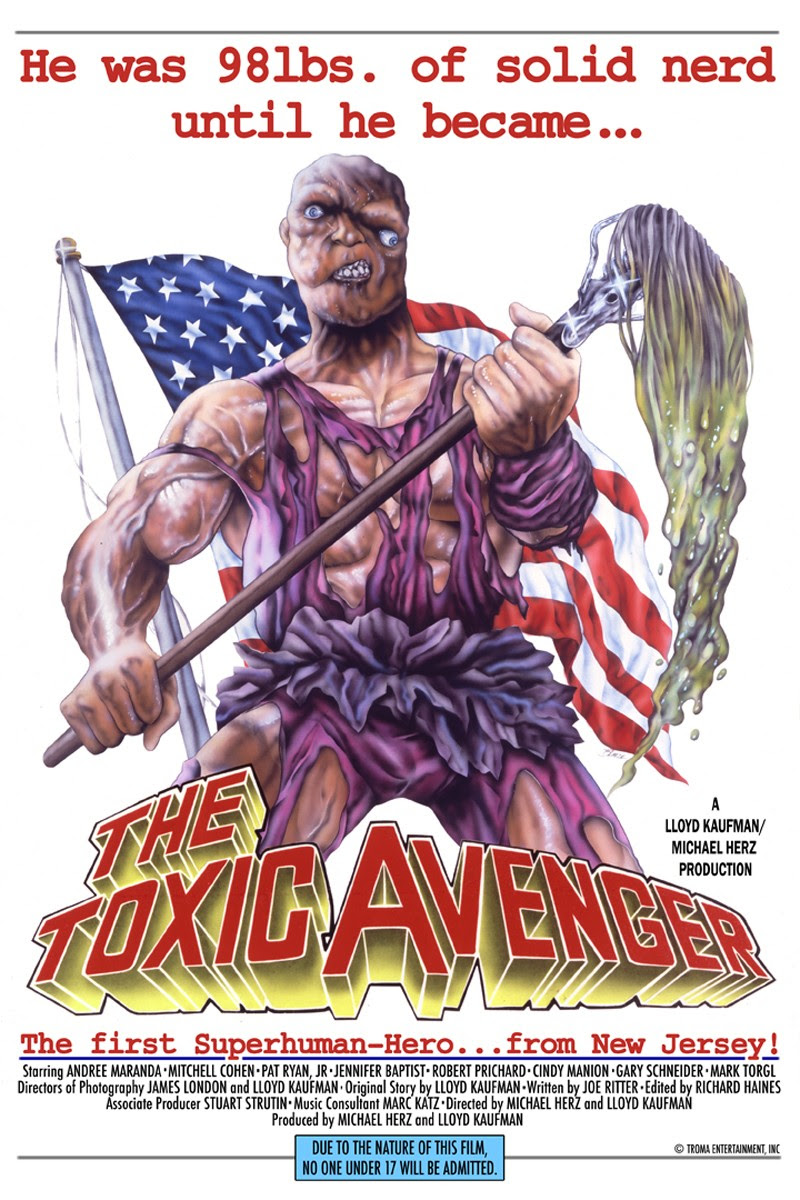