On April 29th, National Canadian Film Day, the SHIVERS FILM SOCIETY will be presenting the early David Cronenberg shorts Stereo and Crimes of the Future, with his first feature film SHIVERS! Visit the EVENT PAGE here.

Tickets are just $12 for all films (plus a SECRET Cronenberg short film!) – and include the Shivers Annual Membership!

Tickets will be available for pickup at the theatre.

So I guess you’d better hit it! FROM WITHIN, the David Cronenberg retrospective, wraps up its final week at the Cinematheque, showcasing the hit-and-miss last four films of the celebrated and always interesting Canadian auteur. My personal favorite of this most recent time period, A History of Violence, which is a somewhat artistic meditation on the applications and results of violence, and violence in the psychology of people, is given a second screening this Wednesday — for those of you who missed it on Sunday. Eastern Promises is a good follow-up in this arena of psychology and violence, while Cosmopolis, the director’s latest, is a meditation on progress and society through the drolly satirical POV of Robert “Twilight” Pattinson — billed as an “apocalyptic satire”, it might really only be the apocalypse of some rich yuppie’s mind. Intriguing, nonetheless. Even though I didn’t quite like this film when I saw it last year, I’m oddly compelled to watch it again. Strange.

FROM WITHIN closes on May 2nd.

Continuing the Cronenberg retrospective FROM WITHIN, The Cinematheque begins showing the films from the second half of this celebrated auteur’s career on Wednesday. This week, you can see three of Cronenberg’s works as he moves his artistry deeper into the realm of neo-surrealism, with the psychological Spider, the physical-psychological eXistenZ, and the purely physical (yet haunting) Crash. (And to delve more into the neo-surrealism of the film Crash you could do worse with your time than to read the insightful BFI Modern Classics: Crash, by Iain Sinclair… Or you could just go see the movie! Playing this Thursday/Friday – see theCinematheque.ca for further details).

…Who’s down with that?! Three awesome eighties classics from the ex-Baron of Blood, showing as a killer triple-feature this Good Friday at the Cinematheque! The Dead Zone, The Fly, and Dead Ringers. Following the commercial failure of his masterpiece Videodrome, David Cronenberg would not direct another original story for 16 years (and even then it would only be that one more time). He would begin his ongoing trend of adapting existing material by tackling a classic Stephen King novel, The Dead Zone, at one point taking King’s own screenplay from him and brutally re-working it for the cinema. Cronenberg’s idea was: In order to be faithful to the book, we have to betray the book — and even screenwriter Jeffery Boam admitted (of King’s screenplay), “I think he missed the point of his own book”. King has not said much of this adaption over his career (at least he wasn’t as critical of it as he’d been with Kubrick’s version of his Shining novel), and even 31 years later it still stands out as a stellar cinematic telling of one of King’s best books. Following this, Cronenberg came across a remake screenplay by Charles Edward Pogue (who also wrote the underrated, in my opinion, and giallo-esque  Psycho III) – and promptly re-worked nearly the entire screenplay, while retaining the lead credit for original writer Pogue, as Cronenberg said in the book Cronenberg on Cronenberg: “There was no question that Chuck Pogue should get the first credit, there wouldn’t be a Cronenberg version if there hadn’t been a Pogue version”. What might be slightly unfortunate to his legions of Canadian fans was that The Fly was the film that culturally pushed Cronenberg intothe side of the American horror filmmakers. Although The Fly was shot in Toronto and not actually meant to take place in any locatiuon-specific setting, when it came down to the artistic details (check out the dollar bills in the infamous arm-wrestling scene), Cronenberg would make the call to keep it American, or at least, American-looking. Following this, though, he brought it back to Toronto with his take on the sort-of true story of identical twin gynecologists with twistedly obsessive and self-destructive behaviors (also based on a 1977 book by Bari Wood) that would really usher the cinema of Cronenberg into the nineties and into the international spotlight. Indeed, Dead Ringers is one of the many highlights of this auteur’s career. And his follow-up would then be the sensational take on a book nearly as famous for its un-filmability as for its author, William S. Burroughs – Naked Lunch, which plays through the Easter Weekend as well. 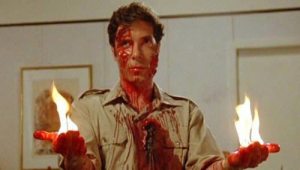 “All right. We’re gonna do this the scanner way. I’m gonna suck your brain dry!” -Darryl Revok (aka Michael Ironside).

So, will you be joining us for the likes of The Brood and/or Scanners at what’s surely to be the most surreal horror/sci-fi double feature this side of Naked Lunch? The Cinematheque continues their David Cronenberg retrospective featuring films from his horror, sci-fi and Stephen King era (1979-1983) this Friday night straight on ’til Monday. We’d also like to congratulate our Cronenberg contest winner, as he & his guest will be going to see Videodrome tonight courtesy of The Cinematheque and us (Shivers Film Society). Nice work on that one!

This will be the last weekend (!!!) to see any of Cronenberg’s early original works on the big screen. (Although The Dead Zone will have repeat screenings later next week). 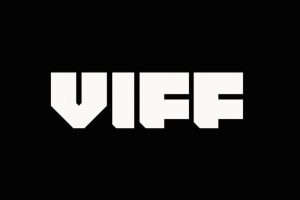